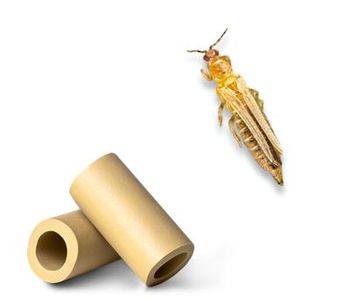 This pest feeds to feed on over 500 different species of host plants, including a large number of fruit, vegetable, and ornamental crops. The insect damages the plant in several ways. The major damage is caused by the adult ovipositing in the plant tissue. The plant is also injured by feeding, which leaves holes and areas of silvery discoloration when the plant reacts to the insect’s saliva. Nymphs feed heavily on new fruit just beginning to develop from the flower.

This species of thrips is native to the Southwestern United States but has spread to other continents, including Europe, Australia, and South America via transport of infested plant material.

As long as environmental conditions are favourable, Frankliniella occidentalis will reproduce continuously, with up to 15 generations in a year. The total life cycle from egg to egg has been recorded as 44.1, 22.4, 18.2 and 15 days at 15, 20, 25 and 30°C. Each female lays typically between 20 and 40 eggs during its life.