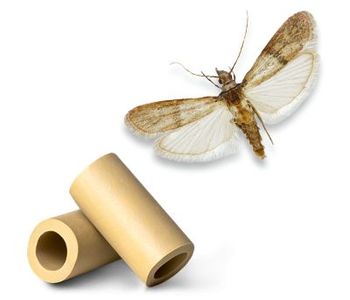 This pest is a pyraloid moth of the family Pyralidae. Plodia Interpunctella feed on plants, grains, and other human food products. Moths feed on many plant-based foods including dry pet food (plant based), birdseed, cereal, soup mixes, bread, pasta, rice, flour, spices, dried fruits and nuts. Other optimal diets include sultanas, American yellow corn and almonds. Groundnuts and maize meal, on the other hand, result in a longer development time for the moths.

Plodia Interpunctella is found on every continent in Tropical habitats, excluding Antarctica.

A life cycle can be completed in 27 to 305 days. A single female can lay up to 400 eggs after mating. The mating and laying of eggs occurs about three days after adult emergence. The eggs hatch in seven to eight days at 20°C and three to four days at 30°C. Upon hatching, the larvae begin to disperse and within a few hours can establish themselves in a food source. Indian meal moth has up to 5 generations per year.